5 CREATIVE DIRECTORS TO FOLLOW WHO ARE REVOLUTIONIZING THE FASHION INDUSTRY

Between increasingly innovative collections, fashion shows in all corners of the world and creations that dictate the latest trends of the moment, who pulls the strings behind the big fashion brands?

DEMNA GVASALIA
Demna Gvasalia is definitely one of the revolutionary protagonists of fashion in recent years. After working with giants such as Maison Margiela and Louis Vuitton, in 2015 he landed in the Balenciaga world and turned its stylistic codes upside down. Creative freedom, experimentation, overturning fashion conventions are just some of the concepts that brought the designer into vogue with the desire to thin the boundary between high and low, between popular and elitist fashion. The Georgian designer succeeded in dragging streetwear into the luxury business by positioning Balenciaga as a cool, nonconformist, unconventional brand, in short, anti-what the luxury industry had hitherto proposed and maximized. Demna’s power lies precisely in knowing how to provoke the public, drawing them more and more to proposals that become unmust, despite the fact that they do not respect the usual known canons, but rather bypass them and create new proposals. 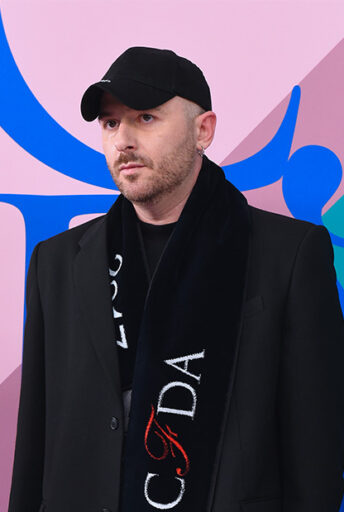 ALESSANDRO MICHELE
Alessandro Michele also became creative director of the Gucci fashion house in the same year as Demna, proposing a different style, however, one that uses the power of design, art, and culture to give a unique definition of fashion. Contamination is the expression of her creations that introduce a genderless orientation, made of experiments and synthesis between baroque and punk, renaissance and chaotic. Collaborations with celebrities and other brands are another feature that brings Alessandro Michele to the international scene, and fashion for him is not just clothing, but a real personal narrative. He encourages sustainability and supports its development at Gucci, breaks down the gender distinction by exalting androgyny, and turns fantasy into reality, bringing magic in the true sense of the word to the runway as in the last Cosmogonie show at Castel del Monte, where each guest was given a star as an invitation to participate in the show.

SIMON PORTE
Straight from the South of France Simon Porte lands in fashion thanks to his brand Jacquemus, which in a few years makes him one of the most influential designers in the world and enfant prodige of French fashion. His style is the opposite of what has been described so far; he does not seek provocation, but develops a clean minimalism that resituates women’s grace and femininity. Her lines are dry, moving away from the concept of oversize and liberating the woman by offering warm tones and pastel colors. Her trademark is the bucolic and dreamy atmosphere, such as the fashion show on lavender fields “L’Amour” whose images bounce on the net all over the world or “Le Splash” which has a fresher and celebratory tone towards the sea, sun and ocean of Hawaii. Its style gives lightness and lightheartedness in a combination of colors and surprises that always leave the audience speechless, such as the colorful pop-ups opened only for 24 hours in the main cities of Europe.

PIERPAOLO PICCIOLI
After 26 years working alongside Maria Grazia Chiuri, Pierpaolo Piccioli became Valentino‘s sole creative director in 2016. Right from the start, a change in the brand’s stylistic norms was evident, undergoing a new sensibility, so much so that Pierpaolo Piccioli received a standing ovation at his first debut fashion show in 2017. Awards and successful labels still crown his professional career, which is growing thanks to his ability to rewrite Valentino’s brand identity by innovating and modernizing it but without losing its essence. Inclusiveness has recently become the motto of the fashion house thanks to the Anatomy of Couture fashion show, in which “it is not the body that has to adapt to the dress, but the other way around.” The humanity and beauty of people, without age or size, is placed at the center of his work, sending a social and political message of utmost relevance, namely inclusion. Another strategy undertaken by the designer is the color strategy dedicated to “macho pink,” a vibrant pink that has flooded this year’s men’s fashion invading social networks such as TikTok, celebrities, red carpets and the Met Gala in 360 degrees.

MARIA GRAZIA CHIURI
In the same year that Pierpaolo Piccioli was appointed creative director at Valentino, Maria Grazia Chiuri moved to Dior, definitely opening a new chapter in her career. In fact, in the history of the French fashion house she is the first woman to occupy the role of creative director for Dior. This is also reflected in her style, in which the figure of the woman is placed at the center of her creations, combining classic and modern elements, elegant but at the same time gritty. The extreme femininity that characterizes women does not limit them, but rather encourages them to be protagonists, like her iconic “We should all be feminists” shirt. The connnubium of her style brings together soft colors and embroidery with a modern and sporty touch with t-shirts, denim and blazers. Her goal is to maintain the Maison’s stylistic code and the elegance that has always characterized it, but reworking it from her point of view.

In short, we are talking about real revolutionary talents who have the ability to create new trends and bring them to the market and then make customers wear them. It is no longer clothing, but rather the new formula of a common language.
Who will be the next designer to take over the industry?